I have photographed many people: artists, writers, and scientists, among others. In speaking about their work, mathematicians use the words 'elegance', 'truth', and 'beauty' more than everyone else combined. 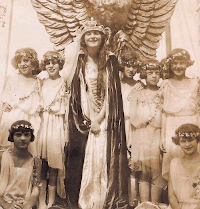 During its second and third years, the Miss America contest winner was Mary Campbell. At the time, the contest looked for the embodiment of a typical and ideal American girl. Mary was energetic and cute, in personality and face. She was a college student, studying art. She lived in Ohio, and her family history included French, Swedish, Swiss, English, Scottish, Cree, and Welsh ancestry.

Mary was 17, and did not know what it meant when newspapers mentioned her "figure". Her mother told her it was "none of her business".

Today you will be the judge of a Beauty Contest of Ideas.

In 2012 the scientific magazine Edge asked its readers, "What is your favorite deep, elegant, or beautiful explanation?"

Ten fascinating replies are listed below.

Your role as judge is to pick the most beautiful of these ten ideas.

Read the replies at the links provided. Some replies are a straightforward read because the author explains everything from scratch. Other replies might require you to search the internet for terms that the authors assume you are familiar with, such as "prisoner's dilemna" or "Planck time".

Present orally to the class your pick as winner. Explain why you picked that idea as the most beautiful. Also share a very short account of the process you used to understand and judge the ten contestants before making your choice.

It is okay if things get a little weird. Beauty contests sometimes do.

For example, I have no idea why the internet has a picture of Adam West dressed as Batman at a beauty contest. Did he win? Is he handing out a prize? Rest assured that whatever you share, it will not be the weirdest beauty contest ever.

If more than one student does this playground, please talk about a different idea that the students who shared before you. It is okay if you talk about your "runner up" because someone else already discussed the idea you agree is most beautiful.